Singapore/Blogs/All About Probation Period In Singapore You Must Know/

All About Probation Period in Singapore You Must Know 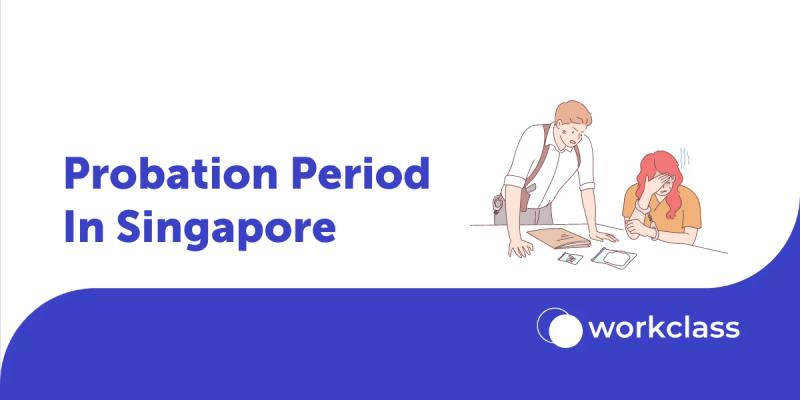 All About Probation Period in Singapore - Probation period is a set period of time where a probationary employee is hired on a trial basis. These employees perform their job during this specific period and through this period as well, their performance will be observed by the employers to determine whether that probationary employee is the employee they’re looking for and finally hire them as a contracted or permanent employee.

If you need to learn more about the probation period in Singapore, read this article until the end.

What is Probation Period?

The definition of probation period has already been explained briefly above. However, the probation period is a trial period for newly recruited employees that usually lasts for three months, six months, or one year depending on the employment contract. During the probation period, your performance will be assessed by the employers to see if you fit the position and eventually can be hired as the actual employee that also deserves all the benefits.

It means that the probation period is organized by the employers and undertaken at the start of a new employment agreement. As the organizer, the employers have the right to determine the length of time to undergo probationary period. It can start from three month to a year or more.

Regarding what will happen next, there are several possibilities. First, you’ll get hired as an employee on a permanent basis. Second, you didn’t get the job. Third, you’ll need to extend the probation period. Ideally, your employer will issue you a written confirmation. But if you haven’t received a confirmation at the end of your probation period, you should check with your employer or the human resource department in your workplace.

How is Probation Period in Singapore?

If you are one of those people taking probation period seriously, you might wish there will be no extension or even worse, being cut off. Regarding the decision to give the employees probation extension, the employers have their own mindset.

There are several reasons probation extension is provided by the employers. Foremost, to give employees a second chance to prove their potential. However, it’s not always that simple. Different jobs can require different amounts of time. One takes a longer time to finish than the other and so on. In this case, such a reason is reasonable because it also means the employers need longer time to decide if you fit for the position.

By giving probation extension, the employee also has the chance to not make the same mistakes again. The employers however need to communicate the mistakes to the employees effectively in order they can grow better from mistakes. Talk to the employees why you extended the period and what improvement you hope to see.

As an employee, your rights are protected by The Employment Act of Singapore. Unfortunately, The Employment Act of Singapore does not have any clauses that specifies the probation period for employees. Thus you can rely on an employment contract as this is your legal paper and you can always negotiate about what to put in the contract with the employers. Talk to them about the probation period to make it clear effectively compared to figuring out yourself because each company is different.

It is also possible to apply for resignation during the probation period by giving notice to your employer as per the contractual terms. However, there are minimum requirements you need to fulfill before it is okay to resign. You need to serve the required notice period stated in your employment contract. You need to also compensate the other party with salary in lieu of you serving out the notice period. Finally, mutual agreement between you and your employer.

If your employer is the one to terminate the contract, they will have to pay salary in lieu of notice. It is compensation paid to an employee when their employment has been terminated and the employer has decided to provide pay instead of having the employee work during the notice period.

This situation leads you to your next potential, will you get paid during the probation period? The short answer is yes. Actually you also need to state your probation period salary in your employment contract.

Just like any other worker, probationary employees work 8 hours in a day or 44 hours per week. If your employer makes you work overtime, you are entitled for overtime pay at the rate of at least 1.5 times your basic hourly rate. Due to the short period, your overtime hours within a month should not be more than 72 hours or 12 hours in a day.

Medical claims or benefits are also one of the benefits that you deserve as a probationary employee. This cost should be covered by your employers. It includes the medical costs which include medication and treatment or ward charges shall be covered by the employers. The employers really have to pay attention to this or you can ask them about the availability during the interview.

Probation period system is widely used in Singapore because it can give many benefits that have proved how important the probation period is in managing new hires better. There needs consideration and strategy in planning the recruitment and probation in order to get the expected result. The right strategy will achieve the purpose of probation that is to assess and bring an effective employee on board.

There are several things that probationary employees need to understand about probation period such as:

Probation period is supposed to be an extended interview that means it is important to provide the employee with a final decision and give them an explanation why this employee is fit or unfit for the position. By explaining the reasons to employees, it gives them clarity on what part they should fix, boost, manage, etc. And they can use that information as feedback that they can use for the next job search.

Read More: Can I Resign During the Probation Period in Singapore

The Importance of Probation Period and How to Maximize the Potential

The importance of probation period is supported with a survey reported by Opinion Matters in 2014 where 18% of new employees fail probation. Without a probationary period, it means that a fifth of your workforce could be worthless. Not just the probationary period, but also the right strategy in the hiring process.

If it’s still not convincing enough how important the probation period is, here is an explanation on benefits and downsides of probation period. So you can use this as a guide.

If the new employee decides to leave because does not meet the probation conditions, companies will save money in comparison to hiring straight into a full-time agreement with no probation period. The reason is because straight full-time employees will instantly receive all the benefits just like other permanent employees. While probationary employees only receive probably half of them.

The issue is that when an employee works in a new company, the process of adapting is not always easy. In the company's perspective, the worst case is if the new employee decides to resign early as soon as they realize the job is not suitable for them. It leads to the one and only conclusion that a probation period is the right strategy to hire people and cost-effective.

Similar reason as the previous point, probation period gives time for the new employee to show their skills. By the time they reach the last notice period, the employers tend to be less guilty in letting go if the new employee eventually is not the one they are looking for.

c. Employees have better chance to get noticed

In bigger companies, this is the chance for the new employee to highlight their skills that can open up a better opportunity within the company at the end of the probation period.

a. Employees can feel undervalued during probation period

If there’s any solution, it’s the employer’s responsibility to give the proper task and do it in accordance with the loads.

b. Possibility of legal risk if not conducted effectively

Clear and coherent contract policies in employment that incorporate all expectations related to a set probationary period is imperative. The reason is because in this era, the job candidates can be from anywhere that nobody expected, such as foreigners.

In this digital era, sometimes certain jobs attract foreigners that cause the employers to be in shock because they are panicking about not knowing what to do. However, clear and coherent contract policies can save the situation.

Finally, the probation period in Singapore is important for both the employers and employees because this strategy can make both meet each other’s needs effectively. There needs adjustment here and there according to the situation and the goals that wish to be achieved. That eventually, applying probation period in Singapore give more benefits for the workforce compared to not using it.

WorkClass is the leading front line job portal in Singapore. They offer jobs from all verticals including production, warehouse, admin and customer service. WorkClass was founded in 2020 and quickly became the leading portal in Singapore and South East Asia. We have a wide range of part-time and full-time jobs in all locations. You can choose between logistics, f&b, customer service and admin jobs. Many jobs do not require any experience and you can start immediately. Over 6,000 employers are hiring with WorkClass. We help you to find a job in 24 hours. We are fortunate to be backed by some of the best investors and we have been featured on Business Times, CNA, and many more. Our mission is to help everyone to find a job in 24 hours.

For more information or enquiries, please contact Rahmad at hello@workclass.co