7 Signs You Didn't Get the Job After an Interview 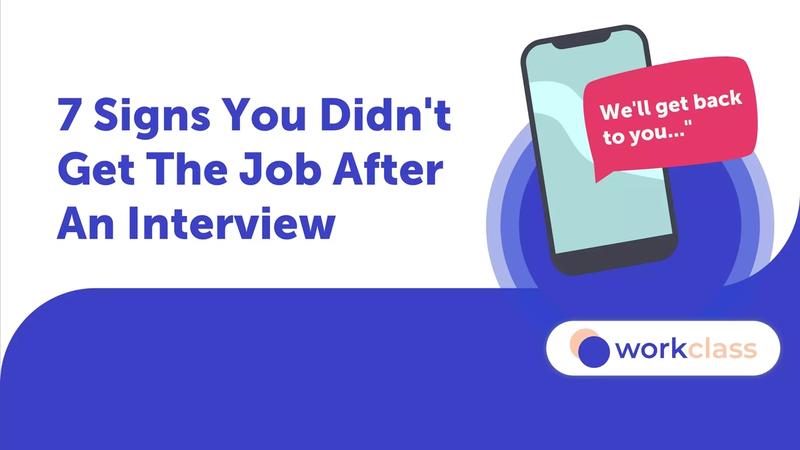 7 Signs You Didn't Get the Job After an Interview

Workclass.co - It's always a nerve-wracking experience when you go for a job interview. You spend all this time preparing for it, and then you wait to hear back to see if you got the job. Sometimes, you might get a call or an email telling you that you didn't get the job.

1) You didn't receive any feedback, good or bad

Even when a large number of people are applying for a position the interviewer has a good idea of the people who are most qualified and will reach out to them relatively quickly if they want to hire them.

2) The interviewer didn't ask about your availability

When you're in a job interview, the interviewer will often ask when you are able to start.

If they don't ask this question or any other questions about your availability, it may be because they already have someone else in mind for the position and aren't as interested in hiring you.

If an interviewer loves you on the spot he will be eager to know your availability so that he can pencil you in and make sure the rest of the team knows about it.

If the interviewer tells you that they're going to make a decision soon, but then they never get back to you, it's likely that you didn't get the job.

If the interviewer says, "I'll be in touch," chances are good that you're getting hired.

If they say something like, "I'll let you know soon," or "We'll get back to all of you in a few weeks," then it's likely they're not as interested in hiring you.

Read: How To Create a Good Resume For Warehouse Jobs?

This is one of the most blatant signs that your interview didn't go well. If the interviewer says that someone else was a better fit for the role, it means that they didn't think you were a good match for the position.

If an interviewer makes you feel undereducated or underprepared it is likely that you are not a good fit for the job. By doing this they are subconsciously saying that someone else would be a better fit.

The interviewer might also say that the company is looking for someone with more experience if this is not the case. In any of these situations, it's best to take the hint and move on.

Also If they say you're overqualified, it may be a sign that your skills don't quite match what they're looking for.

5) Your interview was shorter than usual

If you had a short interview, it's likely that they didn't think you were the best candidate for the job. Usually, if an interviewer thinks someone is a good fit for the position, he or she will go into more detail about their qualifications and ask more questions about their experience. If this doesn't happen in your case, then it's likely that you're not the best candidate.

Short interviews usually mean that the interviewer has already made up his or her mind and is just going through the motions to meet with all of the candidates. As a rule of thumb, interviews that typically last under 10 to 15 minutes usually result in a negative decision.

6) The interviewer doesn't sell you on the position

The position duties should be clearly explained during the interview process. If this isn't done, then it may mean that they are not interested in hiring you for their company; an explanation of what's expected can help decide whether joining up would make sense based on your interests and skillset!

Interviewers are always looking for the best candidate, which is why they'll do everything in their power to make sure you're happy. If an interview goes well they usually give you a tour of the office to show you around and make sure that you're a good fit for the company culture.

7) Your compensation expectations don't match what they're offering

It's a good idea to ask about the salary range for the position during an interview. If you think that your compensation expectations don't match what they're offering, then it's likely that you won't get hired.

One of the signs is if after you tell them how much money is looking at or expecting in a position and they don't counteroffer. Keep an eye on their body language and facial expressions, too. If they seem uninterested in your response or don't make eye contact, it's likely that you won't get the expected salary.

Read: Questions You Should Not Ask in an Interview

The job listing is still active on the company's website.

Most of the time, companies will remove their job postings after they've hired someone for that position. If a job listing is still up on the company website a few days after your interview, it's a sign that you didn't get the job.

Read: Why Job Post Is Taken Down After Interview by Companies?

The job market is a competitive industry. You have to be on your toes and put your best foot forward when you're looking for a new opportunity. However, even if you do everything right, sometimes things just don't work out.

If you think you nailed your interview but didn't get the job, these seven signs might explain why. Keep these in mind as you continue your job search and stay positive; there are plenty of other positions out there that would be a great fit for you. Thanks for reading!

WorkClass is a front line job portal in Singapore that offers positions from a variety of industries including production, warehouse work, administrative roles, and customer service. The company was founded in 2020 and rapidly became the go-to site for employers and job-seekers in Singapore and South East Asia. With a broad range of part-time and full-time jobs available in many different locations, WorkClass gives users the opportunity to apply for positions in fields such as logistics, food and beverage, customer service, and administration - many of which don't require any prior experience. The company has also been featured in reputable publications such as Business Times and CNA. WorkClass's mission is to help everyone find a job within 24 hours.

For more information or enquiries, please contact Rahmad at hello@workclass.co