Singapore/Blogs/What Is A Blue Collar Job? The Meaning, History And Ecamples/
Back to all blog posts

What is a Blue Collar Job? The Meaning, History and Ecamples 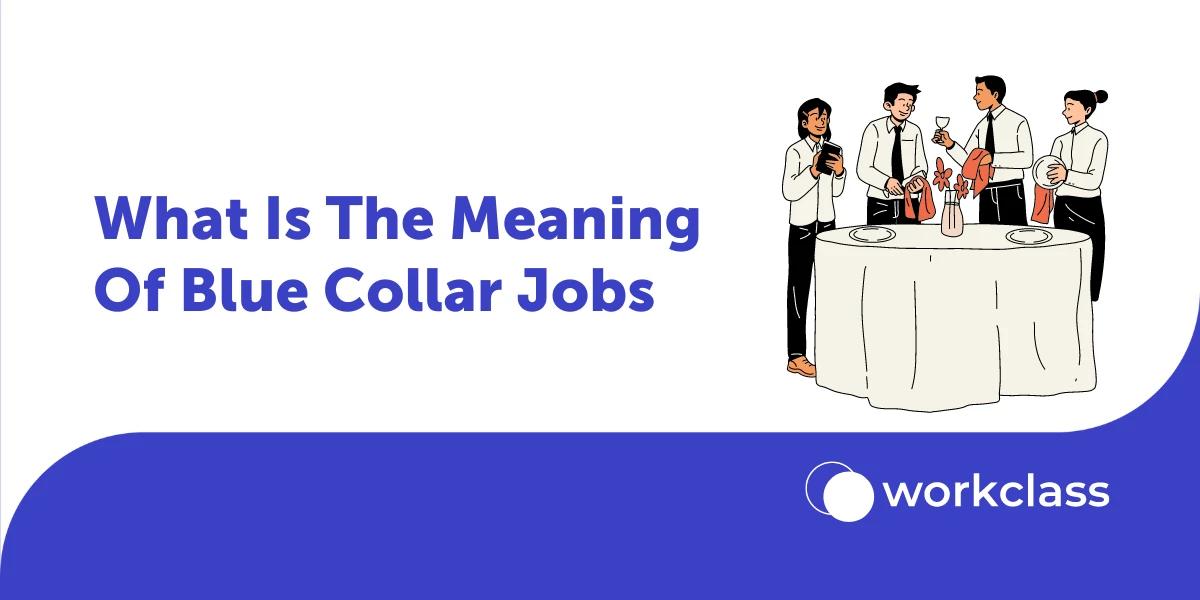 What is a Blue Collar Job? - Couriers, warehouse staff, cleaners, and daily labourers are few occupations that can be categorised as blue collar workers. This category is commonly characterised with people who work in a non-office setting such as construction site, production line, and driving. Their job usually requires good hands and physical abilities because they have to perform their roles.

Blue collar job is a category of workers who perform manual labour. Their jobs usually require great physical abilities to do their duties. The main reason is they usually have to operate machines or vehicles, sometimes big ones.

Operating big machines and vehicles can be dangerous and make these blue collar workers at risk of accidents if they are not careful. That is why their job is not as simple as performing their duties only, but also follow the workplace safety and health guidelines.

To emphasise the importance of following workplace safety and health guidelines, they’re gathered by the manager or higher position to be informed and reminded to, again, follow the guidelines regularly. The gathering can be scheduled weekly or every morning before they start their job depending on the company’s regulation.

It is really that important to perform their job and carry the workplace safety and health guidelines at the same time. Sometimes people overlook the blue collar workers for what they can only see and they think their job looks simple. In fact, that’s not true at all. These blue collar workers also have to adhere to safety rules and this is the part that most people can’t see.

If you hear blue collar, you may also have heard white collar. Both are working groups of different classification. For example, blue collar workers usually work on sites, roads, and don’t work in an office. As they usually work for certain fields such as agriculture, construction, manufacturing, maintenance, and mining.

While white collar workers usually work on a desk in an office and mostly they work indoors. Their roles usually are in clerical, administrative, and management roles.

Other than blue and white collar jobs, there is another working group classification and still divided by the collar colour. They are purple collar, pink collar, red collar, grey collar, green collar, and gold collar.

The term blue collar job was first used in 1924 in the Iowa, United States for their newspaper. The colour ‘blue’ was chosen to describe this working group because the manual workers wear blue, navy, or light blue denim or chambray for work. They wear denim because it is durable and just the right material for their harsh workplace.

The blue collar job peaked during the Industrial Age in the United States as work migrated from farms to factories. They played a central role in shaping and representing the interests of the working classes during the 20th century. Not only are there myriads of blue collar workers in that era, but also how they develop solidarity with unification among the working group.

Meanwhile in France for example, the collapse of industries such as textile and mining from the 1950s onwards caused scarce job opportunities because their factories relocated elsewhere.

Decades later, despite the deindustrialization era, blue collar workers remain a key group in many countries. However they have changed, not totally gone. In international political term, many blue collar jobs are aimed for host country that usually are from developing countries because they can be paid at lower wage. And this is when the history of blue collar job changed since then.

Blue collar workers are the backbone of the country’s economy. But on the other side, their roles are still overlooked, even after hundreds of years. Some people probably think this group’s job is rather simple and easy because they don’t pursue higher formal education.

Well, it’s not true at all.

They do the groundwork. In order to build a country, all elements of the country need to be built. It takes people who are willing to do their part. In this case, many people overlook the roles of blue collar workers and at the same time wish to not work in this working group.

That’s why blue collar workers are essential for the country’s development and most importantly, in economic benefits because they are the ones to do the groundwork. If the whole country only cares about planning and nobody takes part in execution of the plans, nothing will happen to that country.

Now, maybe you also want to know blue collar occupations. So here are some of them.

Warehouse staff usually work in a warehouse whose responsibilities range from loading and unloading trucks to picking items for shipping. They also have to operate machines such as forklifts, for example.

A plumber works to install and repair pipes that deliver drainage, gas, water, and sewage to buildings. In order to work as a plumber, you need to complete an apprenticeship in relevant fields and earn the certification.

A tiler’s responsibility is to cut and install tiles for buildings. Be it residential homes or larger buildings. While it looks like this job is simple, they need to obtain special licensing to work as a tiler.

Carpenter is a job for someone who builds and repairs wooden material into furniture or other structures within buildings. While many carpenters don’t pursue apprenticeship, certification, or even formal education, many would choose to undergo training in order to upgrade their skills.

To become a truck driver, you will need a driving licence specified for driving a truck or large vehicles. They usually also receive on-the-job training when they’re just getting hired to perform tasks their employer asked them.

This job is quite dangerous because boilermakers deal with steel, iron, or copper to make boilers. This job makes them need to be extra careful or accidents might happen.

A landscaper’s role is to plan and install new landscaping features while maintaining the existing features of a building or house. Starts from mowing lawns, installing and maintaining sprinkler systems, trimming trees, and many others as long as they keep the original features.

They work in a manufacturing business to contribute to production of commercial goods. One of their main tasks requires them to operate machines to assemble the materials and ensure it functions well.

Construction manager is responsible to ensure the appropriate safety measures are being taken. They monitor the projects and employees to make sure that the project is going well and surely will meet the goals.

Their responsibilities are to remove, install, or repair underwater equipment. In order to do their job, they also need to use scuba gear and power tools which means they need to have the skills to do this job.

As the manager, their role is to hire and train the employees to do their jobs as a repair staff. They’re also responsible for ordering supplies and ensuring the equipment to work properly.

Police officer’s role is to enforce law. Their duties include patrol around their assigned area, responding to dispatch calls, hazardous situations, and many others.

They work to install and repair electrical wiring and lighting systems for resident houses, factories, or businesses. Since they deal with electrical wiring, this job can be dangerous. Thus people who work as electricians need to be able to perform their job carefully.

They inspect and repair aircraft engines. Since aircraft is obviously a large vehicle, they need to be skilled at operating tools and machines while also following aviation safety management.

Blue collar job refers to people whose jobs require great physical abilities, manual labour, and sometimes out of office or don’t have their own desk. While their role is important, this working group is still overlooked by many people for doing jobs that cause their clothes to get dirty, unlike white collar jobs. In fact, their role is the backbone of the country’s economy. So never take blue collar workers for granted!

For more information or enquiries, please contact Stephan at hello@workclass.co

WorkClass is the leading front line job portal in Singapore. They offer jobs from all verticals including production, warehouse, admin and customer service. WorkClass was founded in 2020 and quickly became the leading portal in Singapore and South East Asia. We have a wide range of part-time and full-time jobs in all locations. You can choose between logistics, f&b, customer service and admin jobs. Many jobs do not require any experience and you can start immediately. Over 6,000 employers are hiring with WorkClass. We help you to find a job in 24 hours. We are fortunate to be backed by some of the best investors and we have been featured on Business Times, CNA, and many more. Our mission is to help everyone to find a job in 24 hours.

Are interns and part timers entitled to CPF contributions?

Average Salary in Singapore by Age, Experience and Education Level